My son Ezra and I recently watched the latest Spider-Man film, Spider-Man: Into the Spider-verse. We both were blown away. I left with my mind on fire about it. So I thought I’d put a few posts together about the film and why a film like this matters.

I’ll try to keep the posts short. And I will try not to give any significant spoilers.

This film has it all, to be honest. It certainly follows the “coming of age” trope that we see in my films. Main character, Miles Morales, is deeply challenged after changing schools, feeling like an outsider.

And he is. His mom is Latino and his father Black in a mostly all-White world. He attends a prep school with heavy textbooks and rigorous academic life while he seems to be most alive when creating art, especially spray-painting murals on NYC walls. Oh yeah, his dad is a NYPD police officer so the graffiti thing may not be a wise choice, long-term.

Early in the film, he spray paints a beautiful cityscape with a hollow figure in the forefront. This seems to be a moment of confession for Miles: he feels empty, like he has no substance or shape. 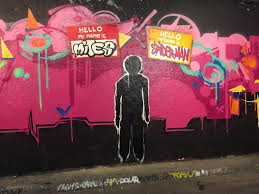 Miles has his spidey senses activated early in the movie and struggles to figure out how to use them effectively. Until he reaches a point when he knows he’s needed. In a stunning scene, Miles free falls from the highest height in the city. If he cannot summon his identity, he will be doomed. But, in the climax of the moment, he’s able to live into his fullest self.

Whereas his mural in the early part of the film is hollow, he is “filled in” at this moment.

As he falls, he actually comes alive.

One of the essential traits that I see in the life of Christian discipleship is a term James Joyce dubbed, “chaosmos.” It is a compound word: chaos (pulling apart) and cosmos (putting together). A pattern that we see in the DNA of any inspiring Christ follower is that it seems that their life is being pulled apart and put back together, at the same time.

It certainly is the case for Miles’ coming of age moment in this film.

How about you? Do you feel both the thrill of progress, development, and growth alongside of setbacks, deconstruction, and pruning?

If so, maybe you are not far from the kingdom.